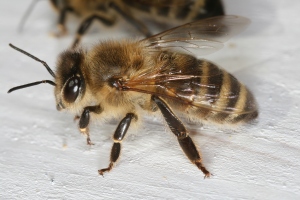 Today’s post is about the most humble member of the colony, the worker bee. The worker bees are the building blocks of the hive, serving all functions from nurses to cleaners and foragers to guards. At any one time there may be as many as 80,000 worker bees in a single colony.

The worker bee begins life as a fertilised egg laid into a normal cell in the comb. This egg then hatches into a larva after about 3 days, and is then fed royal jelly for the first two, followed by just honey and pollen for the next 4 days. 6 days after hatching, the cell is capped by the nurse bees and the larva becomes a pupae, which then emerges 12 days later. The entire gestation period from egg to emerging adult is around 22 days.

In the early stages of its adult life the worker bee remains in the hive, cleaning cells, feeding larvae, processing honey, creating the comb, guarding the hive and helping to cool the hive by fanning its wings. After around 21 days working in the hive, the worker bee exits the hive for the first time and after a brief flight to orient itself, sets off to collect honey, pollen and water to bring back to the hive.

Due to the intense exertion required at the height of the honey producing season (late spring-late summer), a worker bee will live for only around 2-3 weeks after emerging from the hive for the first time. During the winter months a worker bee may live for several months, surviving through to the next spring after having remained almost unmoving inside the hive during the colder weather.

Next time you taste some of that delicious, tasty golden nectar from the jar, just remember all the hard work that went into it!