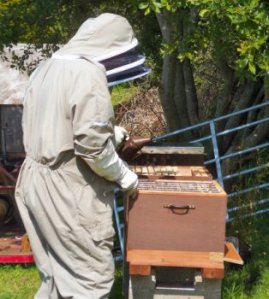 ee rustling is a thing.

Recently I ran across an article (see end of post) about a man who has been bee rustling since 1977, a man who had the dubious honour of  becoming the first man in the US state of California to be convicted of bee rustling. As honey bee numbers around the world have declined, there has been an increase in the number of hives stolen by those wanting to make money from hiring out the hives to pollinate farmers’ crops.

In the UK there are no official figures available on the number of bee rustling incidents, so the actual scale of the problem is currently unknown. The worst part of the these incidents is that they must have been conducted by experienced beekeepers, as no ordinary person without the right equipment and training is going to be able to safely steal a hive. One US beekeeper commented that he once saw “a guy loading a hive into his hatchback car, but moments later the man jumped out of the car flapping his arms around in horror. He dumped the hive 100 feet from where he’d attempted to steal it”. Unfortunately there is no easy way to track a particular colony once they have been stolen, and with colonies selling for up to £250 each, it could become quite profitable for those carrying it out.

Sadly, as this is a crime that’s hard to prove (due to the difficulty of tracking a colony), most of the bee rustlers do get away with it. All that can really be done about it is to take preventative measures, i.e. not having the colonies out in plain sight, securing the area around the hives with a fence and so on.